Lobby Day was “cool,” even “amazing” during the event, but it wasn’t until hours later that it’s true impact hit me. Throughout the day, I felt star-struck, walking through the capitol and shaking hands with senators. Yet, it was the last meeting with Senator Al Franken that changed my mindset. 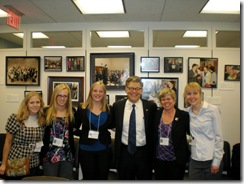 Senator Franken was listening to me as if I had something important to say, as if my story had some meaning. He may already support the bill, but I felt I made an impact anyhow. Maybe I gave him more ammunition.

I know we made a difference by meeting with the other members. We are reminding them that they cannot simply ignore us – that their actions have real consequences and that when they turn down funding for eating disorders, they turn down real people.

Lobby Day was a life-changing experience that I hope to experience again. I never expected it to make such a difference, on Washington or on me. No matter if you are still struggling, recovered, a support person, or simply interested in advocacy, I wholeheartedly recommend that you attend. If you think advocacy doesn’t make a difference now, I think you’ll change your mind.